After central banks’ last meetings and a cooling in US inflation to 7.7 per cent in October from 8.2 per cent in September, markets are pricing in a greater probability of 50bp rather than 75bp rises in the next announcements by the Fed, ECB, BoE, Swiss National Bank and Bank of Canada, and smaller rate rises continuing into next year.

The US Federal Reserve, European Central Bank and Bank of England have given a “clear signal” that “we’re coming towards a period of slower tightening, mirroring what we’ve seen from Australia, Canada and Norway”, said James Pomeroy, economist at HSBC.

Monetary policymakers believe the aggressive rounds of tightening were having an effect on consumer prices, said Jennifer McKeown, chief global economist at Capital Economics. “We expect central banks to slow the pace of rises due to a combination of weakening economies, easing domestic price pressures and the fact that interest rates are above or reaching equilibrium levels [where activity is neither restricted nor boosted],” she said.

Capital Economics expects that most of the next moves across more than 20 central banks it tracks to be rate rises of 50 or 25bp. Hawks in the world’s central banks won the battle of ideas over the autumn, announcing interest rate rises of a magnitude last seen decades ago. Together, 20 leading central banks have increased rates by a total of nearly 11 percentage points since August, showing the recent direction of travel in monetary policy. The Bank of Japan is an outlier as it has not raised rates since 2007 and is not forecast to increase them any time soon, while Russia and Turkey have cut rates.

The Fed, ECB, BoE and BoC alone increased rates by a total of 5.5 percentage points over that period, with all of them delivering at least one 75bp increase. The Fed had not raised rates by 75bp since 1994 but has delivered four consecutive rises of that size since June, with the main federal funds rate now 3.75-4 per cent.

The ECB’s 75bp rises in September and October, taking the deposit rate to 1.5 per cent, were the biggest tightening moves in its 24-year history, while the BoE’s similar increase in November was its largest in more than four decades, leaving the rate at 3 per cent.

With policy rates now much closer to their equilibrium or “neutral” level and economic activity weakening, “the case for scaling back policy tightening . . . has strengthened”, said Ben May, global economist at the consultancy Oxford Economics. 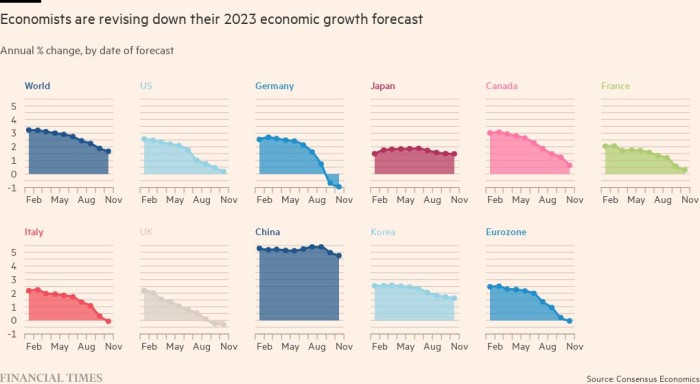 There are many signs of weakening output. S&P Global’s purchasing manager indices indicated a deepening downturn for the US, UK and eurozone in October. The global index of new orders dropped to the lowest level since spring 2020, at the height of the pandemic.

Consumer and business confidence levels are near record lows in many countries as high inflation and a surge in borrowing costs after the round of big rate rises hit household and corporate spending.

Economists are revising down their growth forecasts for 2023 for the wealthiest countries and expect output to decline in Germany, Italy and the UK. 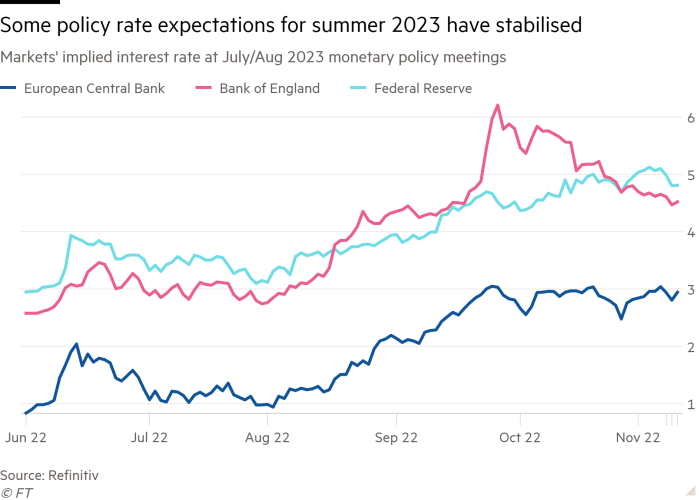 In the UK, higher rates were priced in after aggressive tax cuts were announced in September’s “mini” Budget. But with these cancelled as part of the new government’s more modest fiscal plans, expectations for next summer have largely returned to their mid-September levels of 4.6 per cent. Susannah Streeter, senior investment analyst at asset manager Hargreaves Lansdown, said it was “sensible” to expect smaller increases in the UK, “especially with a recession forecast which could last two years and bring deflationary pressures”.

In the US, market expectations for next summer continue to rise after Jay Powell, the Fed chair, warned that rates would peak at a higher level than expected.

However, even the Fed may be adjusting policy as the recent rate rises begin to reduce economic activity. “The more aggressive moves appear to be coming to an end, with a gentler strategy expected in the months to come,” said Streeter.

Where to drink vermouth in Madrid