Hello and welcome to Europe Express. Val is away today so it’s me, Henry, steering you through the Europe news you need to know this morning.

I’ll start by taking you through a marmalade-dropper of a U-turn in the latest draft of an initiative designed to use EU taxpayer money to turbo-charge Europe’s defence industry. Plot twist: you will be able to spend the cash on American kit instead.

Sticking with war — or at least the threat of it — the US has commissioned a report into the economic cost of a Chinese invasion of Taiwan and circulated it among EU diplomats, officials and member states to make stark the minimum economic impact: $2.5tn is a staggeringly big number that has got Brussels’ attention.

And on energy, the European parliament has waded into the debate over using bloc funds to pay for oil and gas projects, demanding the European Commission put safeguards on the REPowerEU initiative to limit how much can be spent on fossil fuels.

This article is an onsite version of our Europe Express newsletter. Sign up here to get the newsletter sent straight to your inbox every weekday and Saturday morning

It was initially billed as a €500mn sweetener to encourage European governments to work together on joint procurements of European weapons. Rebuild stocks depleted by the war in Ukraine while at the same time boost the continent’s military-industrial complex, went the thinking. It’s less clear now.

The latest draft of rules governing the European Defence Industry Reinforcement through common Procurement Act (EDIRPA) remove that link. What member states are now proposing is a workaround that will — in the name of speed and short-term fixes — allow this EU fund to support joint purchases of arms from third countries.

No prizes for guessing which particular third country is likely to be top of shopping lists. It makes the F-35 fighter jet and the Patriot missile system — both in high demand from European capitals since Russia’s invasion of Ukraine began in February.

When EDIRPA was first announced in July by internal market commissioner Thierry Breton, reporters were told that the fund would give cash to joint procurement of weapons “made in the EU but with no strings attached”.

But the latest draft of the regulation, first reported by Bruxelles2, appears instead to be quite strings-friendly, stating that “in light of the current situation”, products “subject to a restriction by a non-associated third country” are also allowed.

Negotiations are ongoing and the text could yet change again, but EU officials involved in the drafting say that the dilution is needed to meet short-term needs and restock arsenals cleared out by the necessity to supply weapons to Ukraine.

Russia’s war against Ukraine has made stark Europe’s reliance on the US for defence and security, despite determined language from Paris and Brussels on the need for “strategic autonomy”.

No member state thinks that Europe should rely on the Americans for all their defence kit. But many have spent the past eight months reassessing the feasibility of going all-European, and whether it makes sense spending years developing new platforms with other EU states when you can buy off-the-shelf stuff from Washington (and get a handshake in the White House as part of the deal).

As a case in point, the Czechs last month became the most recent EU member state to submit a bid to buy Lockheed Martin’s F-35s. With current and pending orders, by the end of the decade at least 15 of the EU’s 27 member states’ air forces will be flying American fighter jets.

“This idea that we can protect ourselves without the Americans? It doesn’t exist anymore,” said one senior EU official. “But we can take better care of ourselves at the same time as leaning on them.” 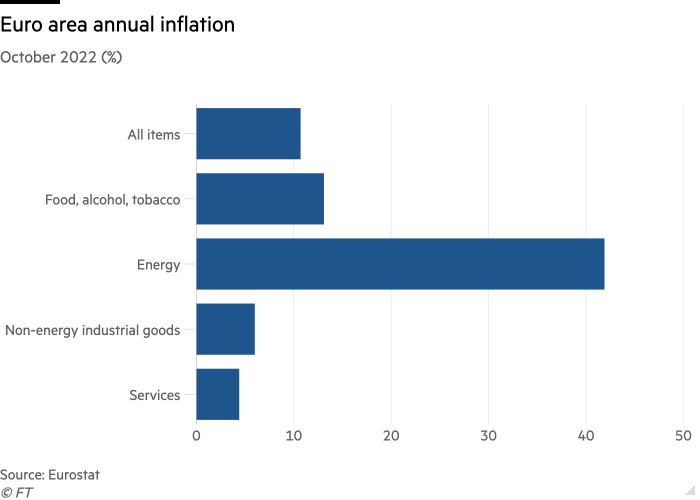 Stubbornly high inflation and warnings of recession: the European Commission is due to put out its latest set of economic forecasts this morning, with expectations that Brussels will predict declines in economic output for the final quarter of this year and the first quarter of 2023.

Feisty words flew following the European parliament’s vote on Thursday to change the way the bloc’s REPowerEU legislation will be funded and include a clause that limits investment in fossil fuels, writes Alice Hancock in Brussels.

Roberta Metsola, the European parliament president, said the vote was a sign that the chamber, which has been sidelined in most of the recent energy legislation, should be more involved: “There is no need for emergency measures that ultimately could undermine the legitimacy of the decisions taken.”

The law, which was introduced by the European Commission in May, is an effort to rapidly wean the bloc off Russian hydrocarbons and speed up the green transition. As part of it, the commission amended restrictions on what member states can pitch to receive money from the Recovery and Resilience Fund, to include gas and oil infrastructure.

Environmental campaigners have pointed out that this goes against the EU’s overall principle that new investments should “do no significant harm” to the climate.

Parliament voted overwhelmingly to put in safeguards that only allow fossil fuel infrastructure to be backed under certain conditions. It also wants an extra €20bn required to fund the law to be taken from selling off future emissions permits, thus forcing companies into a quicker transition to cleaner practices later in the decade.

Member states, by contrast, want the majority of the money to come from the EU’s Innovation Fund, which is targeted at low-carbon technologies.

Peter Liese, who leads on the file for the parliament’s environment committee, pleaded with the commission to take parliament’s side against the council: “Please help us in our battle with the council. They want to plunder the Innovation Fund in a time when $200bn is being put down by the US to further [green investment].”

What to watch today

Recommended newsletters for you

Britain after Brexit — Keep up to date with the latest developments as the UK economy adjusts to life outside the EU. Sign up here

Trade Secrets — A must-read on the changing face of international trade and globalisation. Sign up here

Are you enjoying Europe Express? Sign up here to have it delivered straight to your inbox every workday at 7am CET and on Saturdays at noon CET. Do tell us what you think, we love to hear from you: [email protected]. Keep up with the latest European stories @FT Europe