Jaylen Brown says he doesn’t endorse Barclays protesters, mistook them for a fraternity

A group of Black men wearing purple and gold shirts lined up outside of Barclays Center. Jaylen Brown thought it was Omega Psi Phi. 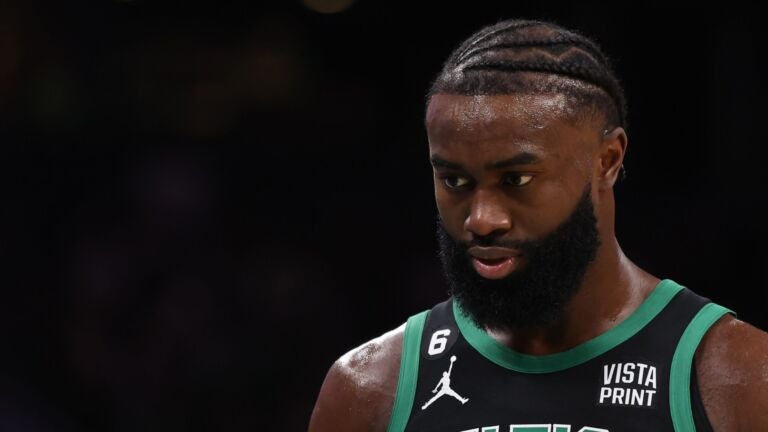 After retweeting a video of Israel United in Christ members lined up outside of Barclays Arena, Celtics guard Jaylen Brown said Monday that he does not endorse the group.

Israel United in Christ has been labeled a hate group by the Southern Poverty Law Center.

The crowd gathered outside of the Brooklyn arena on Sunday night ahead of Kyrie Irving’s first game back from a lengthy suspension over a link to an antisemitic movie shared to Irving’s Twitter account.

“My instincts when I first saw that video comes from a community torn every day by the systemic representation of images of violence in our community,” Brown said. “So when I saw that video, it struck a chord for different reasons. I saw a large group of our people from our community showing support for [Kyrie] and his return,”

Brown said he didn’t know what the group was when he first saw the video.

He tweeted Sunday night that he thought it was the historically Black fraternity Omega Psi Phi. The men in the video were wearing purple and gold shirts, which are the fraternity’s colors.

Brown said that he wanted to promote Black people standing together.

“Me being proud of that support and being proud of our community for doing that does not mean I endorse or celebrate some of the things that were being done or being said,” said Brown.

Brown has spoken openly of his opinion that the conditions for Irving’s return to the Nets were too harsh.

The Nets reportedly had a list of conditions for Irving to satisfy before he could return from an indefinite suspension, that ultimately ended at eight games.

Brown said that he reached out to Irving as both a union member and former teammate, because being “exiled” from the game was “a lot.” Both Brown and Irving are vice presidents of the NBA’s Players Association.

“Kyrie’s contributed in a lot of ways to the game of basketball,” Brown said. “So for him to be able to come back and be on the floor last night, I thought was something to celebrate. I thought that was something to support. The NBA, the Brooklyn Nets decided whatever the disagreements were or the concern was, was obviously handled and we were moving on. I was supporting that decision.”

Get breaking news and analysis delivered to your inbox during basketball season.