Home /
Markets /
Week Ahead: Stocks In Holding Pattern Till FOMC

Week Ahead: Stocks In Holding Pattern Till FOMC

In the second quarter, better-than-expected earnings boosted stocks. On July 19, the gained 770 points, or 2.5%, as traders convinced themselves that the market bottomed amid strong corporate results. Of course, analysts considered corporate earnings to be "strong" after having lowered expectations due to spiking inflation. Then, they were justified in their surprise when the companies managed to operate so well (relative to lower expectations) amid an inflationary environment.

Here is my Opening Bell headline from July 27: "."

However, it was time to pay the piper last week, and investors suffered the worst week since this year's June market low that they have been insisting is a bottom. 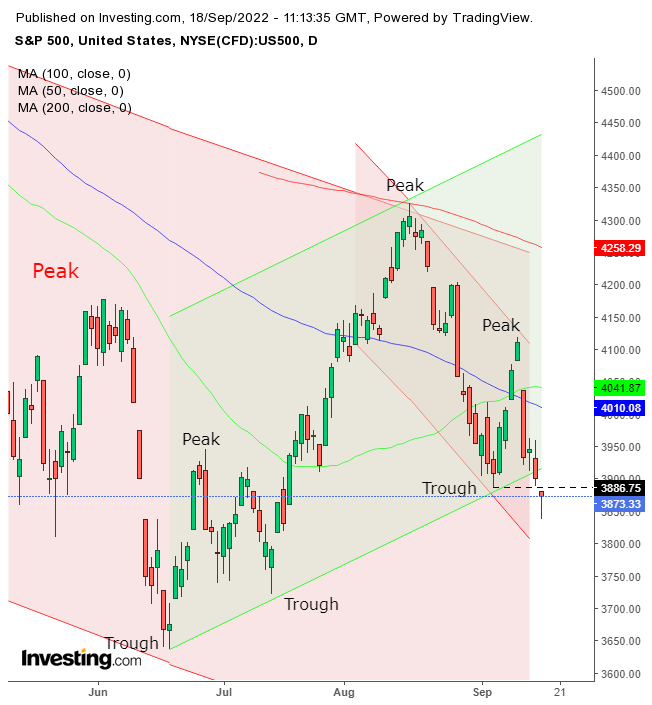 If you haven't connected the dots yet, companies' artificial success amid sky-high inflation allowed analysts to justify the increased risk, which created the June low that so many of my readers insisted was a bottom.

Now, while I didn't think the June low was a bottom, I didn't know it wasn't a bottom. I made an educated guess based on the preponderance of the evidence. I continually said that if the average posts a rising series of peaks and troughs, I will reverse my position. However, bulls, and probably retail bulls, possessed a religious conviction that stocks have bottomed and will now roar back to an ongoing bull market.

Given that driving fundamentals are the inflation-interest rate pair, I submit that stocks will make a new low below June's, extending the downtrend and the bear market. Until that happens, I will not emphatically state that stocks are necessarily heading lower.

I elaborated on Amazon's (NASDAQ:) different trends according to time frames. However, based on the comments, some readers didn't understand the post or its title. You must clarify your time frame when you state that you are bullish or bearish. While I am bearish on the primary trend, I was . It looks like I was wrong, as the made a new short-term low. According to an aggressive interpretation, that is a downtrend in the short term.

At the same time, a conservative technician would wait for another peak and trough to have a declining series independent of the uptrend's peaks and troughs. I expect we will get that soon. Friday's trading created a hammer, which I expect will "hammer out" a short-term bottom, retesting the previous peak when ongoing supply is likely to push the price back even lower, posting another pair of lower peaks and troughs.

Given that has the FOMC repeating another 75-bps hike on Wednesday, investors are waiting for guidance from the Fed and companies. The latter has become a hot potato since FedEx (NYSE:) shook investors Thursday by withdrawing its full-year earnings guidance, as the company experiences its sharpest drop in over 40 years. Note how the timeline corresponds to the fastest interest rates and inflation.

Meanwhile, fund managers upped cash balances to 6.1%, the highest level in over 20 years. Rising interest rates make cash investments attractive for both a positive and a negative reason. The positive reason is a favorable interest rate return; the negative one is avoiding the risk that high rates add to stocks.

Despite the higher interest rate, the "yield curve is set to invert by most in 40 years," demonstrating that the market expects the Fed will need to hike considerably more in order to be able to tame inflation.

That tension between inflation and interest rates may be what has slowed the advance. 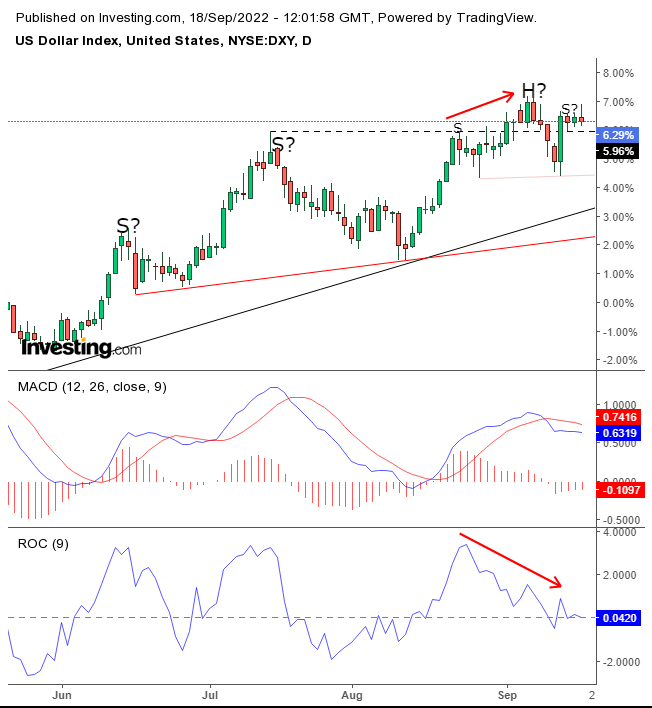 While the greenback is in an uptrend, it may be developing a small head-and-shoulders top from Aug. 22. If that scenario follows through, that small H&S could be the head of a larger H&S since mid-June. Also, the MACD and the ROC are falling, with the latter triggering a negative divergence with the rising price, from Aug. 23 to Sept. 7.

We can see the same tension in . 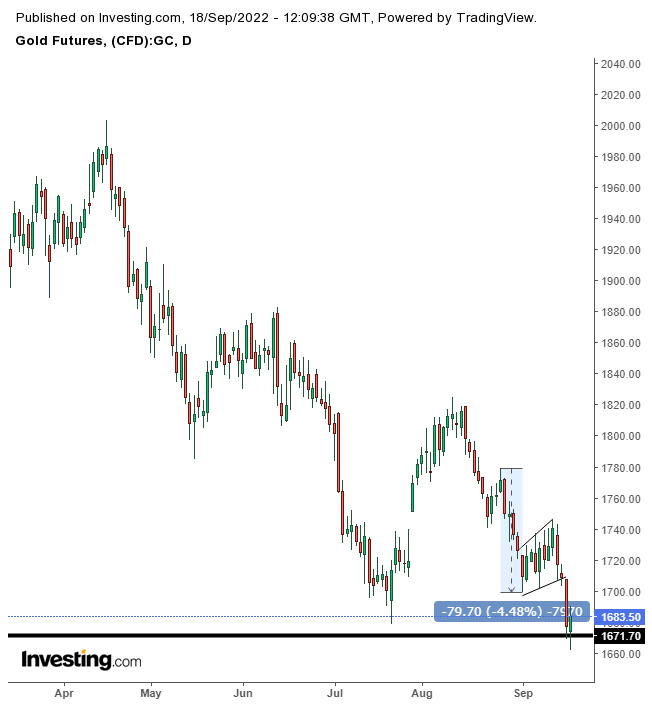 Gold plunged Thursday, completing a daily rising flag, bearish after the preceding drop. The flag's height of $80 implies a $1,630 target. However, the price meanwhile found support by the $1,670 lows since 2020. Friday's bounce could be nothing more than a return move to retest the flag's resistance, after a short squeeze, before it continues toward its target. On the other hand, the over-two-year support could be a bullish stronghold that undermines the flag's bears. That doesn't mean there is no trade here; you must be committed to a coherent strategy according to your timing, budget, and temperament. 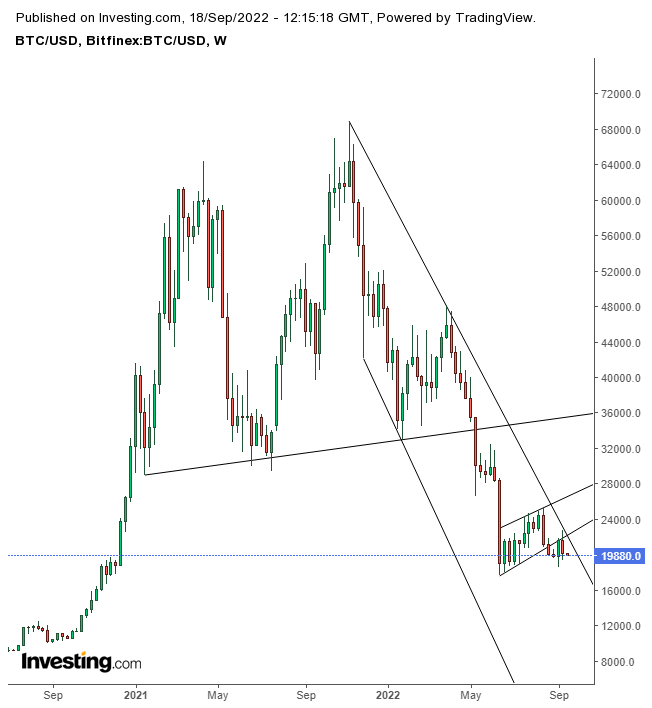 fell 7% last week due to Tuesday's 9% plunge. As I have , a bullish attempt to take on a bearish stronghold was fatal. However, to continue the downtrend, bitcoin will have to register below the Sept. 7 low, which I fully expect the virtual currency to do, according to its long-term supply-demand balance, which I have been .

fell for the third week on ongoing global demand concerns amid a downturn. 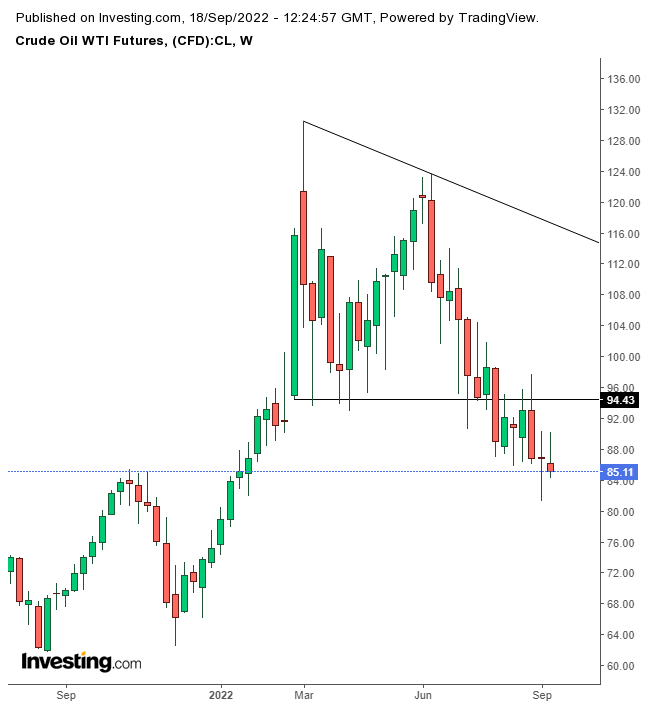 Disclosure: At the time of publication, the author had no positions in the securities mentioned.

Looking to get up to speed on your next idea? With InvestingPro+ you can find

And a lot more. Get all the key data fast so you can make an informed decision, with InvestingPro+. Learn More »